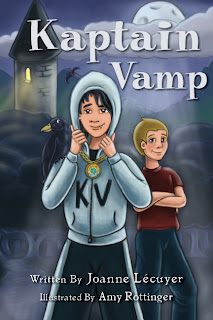 
Kaptain Vamp by Joanne Lécuyer, is about a young vampire named Allistaire. He lives amongst a world of humans and vampires who don't really get along.
Allistaire wants to help humans, but doesn't know how until he reads a certain comic book. Then he becomes 'Kaptain Vamp.'
This was a delightful read. The story of how Kaptain Vamp came about is endearing. Any child would be interested in Allistaire's adventure. I certainly was. And what makes this book even nicer was the wonderful illustrations that took a part in describing this young vampire's tale.
I could not be more happier than seeing where Allistaire was going next. And if you want your child to get a taste of something horror in fiction, but don't necessarily want them getting into stuff that maybe either a bit off or watching some kind of vampire glitter, then this is the book for them. There is no doubt that Allistaire's tale is one of a kind.
Posted by Sonar4landing Dock Reviews at 2:25 PM