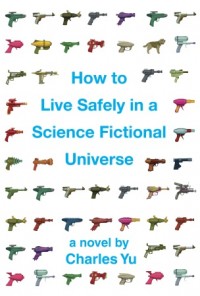 When I was a kid and I thought, or tried to think, about what life would be like in the year 2000 it seemed a far off date that was more science fiction than real. Now we have traveled to this future, so I guess we now live in a science fictional universe, at least according to Charles Yu in “How to Live Safely in a Science Fictional Universe.”

Yu wrote what could have been a fairly typical time travel story about a father and son who work on creating a time machine but get separated in time and space with its invention. However, Yu deconstructs the structure and format of the novel with a genius and imagination perhaps not seen since Phillip K. Dick. It is deconstructed to the bone. It seems like it could be a schematic for a science fiction novel. All the elements of a time travel story become fair game for Yu's pen and wit. All aspects of a time travel novel are torn apart and examined, characters reasons for wanting to travel through time, the existential ramifications, the paradoxes created, even grammatical tenses, and the process of writing the book itself.

I don't want to give anyone the idea that the book is overly academic or studious. Yu has a great sense of humor and freely plays with the genre including meshing, or mashing genres such as L. Skywalker making an appearance. Not Luke Skywalker but his ne'er do well son Linus.

“How to Live Safely in Science Fictional Universe” is a fresh approach to a well established genre. Yu is willing to play with the elements that make up the story, and share that sense of literary adventure while taking the reader through the time machine of a novel. When you emerge on the other side you'll have a slightly different perspective than you did before entering.


Jim Cherry is the author of The Last Stage at www.jymsbooks.com

Posted by Sonar4landing Dock Reviews at 11:46 AM