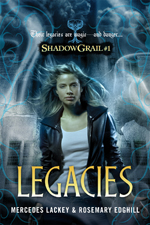 Legacies the first book in the new Shadow Grail Series, by Mercedes Lackey and Rosemary Edghill tells of a teenage girl named Sprint who parents die in a horrible car crash. She wakes up in a hospital where she is told that her parents have arranged for her to go to a prestigious school called Oakhurst. However, once she gets there she finds out Oakhurst is no regular school but one that is for what are considered 'legacy children' which also means magical. As she makes friends and figures out what her powers maybe and why she is there, students start to disappear from the school and her new found friends and her start to investigate. Could there be something more to the school than just learning?

Getting into this book I found it interesting. It kept my attention and seemed to have decent characters and overall background for them to play in. As the main character Sprint and her friends traveled around the school I did get a sense that soon they would walk around the corner and someone would yell 'hey Harry.' Yes there were many similarities to that series where a main character named Harry is in that is included in this book; from the professor name to the school, to even how they go about investigating.

Even though similarities are there between this book and another series out there, I did find it charming and loved the way the characters' powers were described and at times how they were limited even if they were in a magical school.

Yes, this book is easy reading and it won't take years to complete, but it is good entertainment and looking forward to the next book in the series.

Posted by Sonar4landing Dock Reviews at 10:11 AM 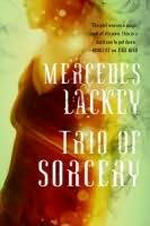 Trio of Sorcery three new tales by Mercedes Lackey. Two of the stories brings back two characters, Diana Tregarde from the Diana Tregarde series in Arcanum 101 and Jennifer Talldeer from Sacred Ground in Drums. Plus there is a new story called Ghost in the Machine.

The first story Arcanum 101, brings back witch and guardian, Diana Tregarde, in the 70's Harvard days. Diana discovers her life as a college student and guardian can be rough and at times lonely. She comes across a cop who sent by what he says is his cousin to seek her help out on a case of what seems to be a fraud psychic. She along with her new found friends in her apartment, seek out the psychic and find out other strange things as well.

Arcanum 101 is the meat of the three stories. It was interesting to see the time period play out with the magic symbolism and how Diana related to it. The story was fresh and crisp. Something that was just plain delightful to read. Even if you haven't read the series of Diana Tregarde before, you will just adore this story focused on her trials being a college student and having these special gifts.

Drums brings back a character from where Sacred Ground left off, Jennifer Talldeer. She's a Osage Shaman and a private investigator. In this particular story, she is tracking down an angry Osage ghost who has paid its attention on a young Chicksaw woman.

Drums lacks what Sacred Ground had started. The story is set more modern in 1995 with a few confusing history points for us who have lived in 1995 would be going 'uh?' The story seemed to drag and drag. The sparkle that was Jennifer Talldeer was not there. She was the same second guessing character who investigated something supernatural, but in Drums it became listening to something whinny and predictable.

The last story out of the three is called Ghost in the Machine. Lackey brought into play a new character,Ellen McBride who is a computer programmer and technoshaman. The story starts out with a programmer, Tom, confused about why people's avatars are getting crucial hits and being killed off when they shouldn't be. Then he receives a suggestion to see Ellen to possible help out with the problem. In turn, there is a lot going into the gaming world and supernatural world they both discover.

This story was to say the least, interesting. In being a gamer myself, it was a nice twist to something some of us wonder at times, could there be some outside force running the game or computer? I would say Ghost in the Machine was like trying a new piece of candy for the first time. The flavor was new, and you liked it, but not sure if you wish to taste it again.

Over all Trio of Sorcery if you are a Lackey fan is not a bad read. I do caution that it does in places lack spark, and a feeling of dread having to push through some of the pages.

Posted by Sonar4landing Dock Reviews at 11:39 AM