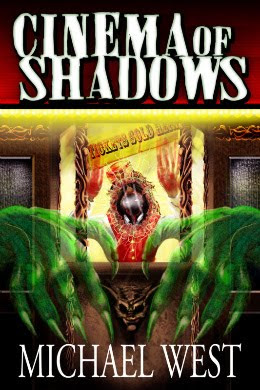 A spooky old theater house - a series of mysterious deaths - a young girl with special powers…these ingredients are mixed into a paranormal investigation to discover the truth about what happened.

Set in the Midwest with plenty of local flavoring, the story follows a pretty much predictable plot line. Although, the angle about the gargoyles was an interesting touch - wait a minute - wasn't that used in Dr. Who? (giggle) Anyway, the possible parallel to the episode 'Blink' was nice, although it is possible the writer, Michael West, may or may not be familiar with the long running British series.

The final epilogue really came as no surprise, almost expected really, since many such horror stories take a final stab at their readers.

There are references to familiar series and movies, giving the story a modern day feel. Some of the language is a bit rough and the talk of female body parts and sex seems to be a common theme in most horror stories, along with the spooky elements.

There are a number of good sentences like 'The table erupted in laughter', 'Rust slowly feasting on the metal carcasses of forgotten film canisters' and a nicely done simile in reference to voodoo dolls and pins. Description is nicely done and the dialogue sounds like real people.

The labeling done for 'Preview of Coming Attractions', 'And now our Feature Presentation', 'Credits' and for the credit watchers, was a nice touch and in keeping with what the book was about.

There are also a few illustrations sprinkled in glorious black and white.

Highly recommended for fans of horror just for the imagery alone and wannabes of this genre should take lessons from a writer who has this skill mastered.

Just watch out for those gargoyles….
Posted by Sonar4landing Dock Reviews at 9:56 AM