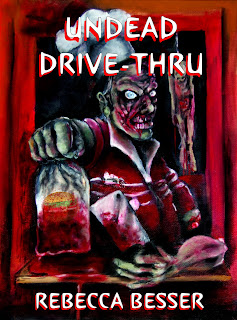 Kyndra and Colleen needed some extra money so the made a choice to apply at Aunt-B's restaurant that is about to open. They get the jobs as waitstaff. Before the opening they are asked to do some work to clean, paint and what not to help with the opening. They meet John, Aunt-B's nephew and Jose who was also just hired. They then get a tour of the restaurant and find out that Aunt-B and her husband Sam live in the back a ways out. Sam apparently is sick and an alarm goes off when he is not supposed to be doing something. But Aunt-B and her nephew keep a secret: Sam does not have an ordinary illness, he's a zombie. Collen and Jose one night run into Sam who was let out to make a new cage for him. But Aunt-B and John can't allow them to go off and tell others so they kidnap them.

Undead Drive-Thru takes twists and turns, leaving gross images behind. The characters are in a frenzy most of the time either for survival or to keep the secret of Sam close.

I found myself thinking if I had a loved one who turned into a zombie what would I do? Morals and real life emotions are placed well in this story as it is not your typical bang, bang you're dead because you're a zombie. It is clear that the author put heart and soul into this writing and thought about how readers would digest the aspect of keeping your loved one even if they are a zombie.

My suggestion? Watch the diners you eat at these days, you never know what might be hidden behind those doors.
Posted by Sonar4landing Dock Reviews at 7:27 AM 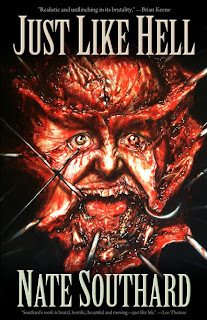 Just Like Hell is a short anthology of five stories from Nate Southard. The first is called Just Like Hell, runs for 70+ pages, and is your stereotypical kidnapped man against several protagonists, but it's very well done since the protagonists really are quite despicable and deserve their gory comeuppance. A Team Building Exercise is like a modern day episode of Outer Limits. A bit more sci-fi than the other shorts, but has a nice twist ending that was quite humorous. Miss Kenner And Me is written in first person and is about a boy who seems just a bit too attached to his teacher, Miss Kenner, to the point where it's creepy, and who latches onto another unfortunate girl who meets an untimely demise. Senorita is a bit of an odd one. Is it horror? Maybe sci-fi? I'm not sure, but it's another one of those stories where its man meets woman, and within minutes he's so obsessed with her he's mowing people down left, right, and centre. No idea why authors seem to keep using the kills-through-obsession scenario. Finally we hit Work Pit Four. It reads like a sci-fi story, but it too has an Outer Limits feel to it. But without the cool twist ending.

Just Like Hell is a nice little book of shorts. There's really only one horror story, the title track, with the others being a bit more sci-fi, but that's OK with me since the horror story takes up almost half of the book anyway. Your a sick man, Mr. Southard. Keep up the good work!
Posted by Sonar4landing Dock Reviews at 6:55 PM

A Vampire's Guide to Sex by Sam Lang Review


If you are looking for a how to manual for vampires, this isn’t it. This short story from Sam Lang is interesting in its design, but is somewhat predictable in the execution.

The story is about Mallory and Danyelle, two normal people, both of whom manage to get themselves turned into vampires before ever having sex. It begins with Mal providing his back story and lamenting that “Why isn’t there an instruction Manual?” for being a vampire. We then jump to Dany who provides her back story and leads into the two of them meeting in search of a meal and a way to finally have sex.

They devise and execute their plan to finally have sex with each other. I won’t spoil the end, you will have to read it.

Overall it was an interesting, if somewhat predictable read.
Posted by Sonar4landing Dock Reviews at 9:13 AM