Party Wolves in My Skull by Michael Allen Rose Review 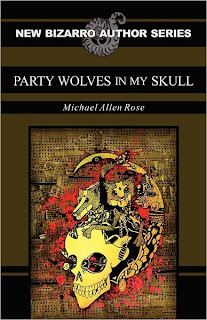 When it comes to the strange and just plain out there, Michael Allen Rose tells the best tale in  Party Wolves in My Skull.

Norman Spooter wakes up one day to find something wrong with his eyes. They not only sting, them seem to be alive. Several small beings are fighting, falling in love with each other and basically trying to rip out of his eyes. Not only can he not see because of this mess going on, he runs into Zoe, a woman who is running away from her out of control boyfriend. What becomes a chance meeting turns into a bizarre adventure of wits and survival through a mess no one can describe better than Rose himself.

Not only will a person want to read this just because it is such a different story, but will just want to see what happens to poor Mr. Spooter who never seems to have any luck and frankly haven't we all had one of those days?
Posted by Sonar4landing Dock Reviews at 1:01 AM 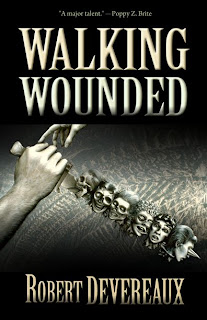 Walking Wounded, by Robert Devereaux, is a bit of a strange one. It begins with one woman who has decided to kill her husband. Good start, but then it seems to slip back in time by twenty years and has characters chatting via BBS. I'm old enough to know about pre-Internet civilization, but I think he'll lose many a reader with that. Also a fair chunk of the book is taken up with showing us how the characters are chatting, via text, in their little BBS world as in every line of chat. Complete with smilies. Really I think that it may well be down to pulling out an old story for current release. The cover is copyright 2011, but the story is (according to the second page) from 1996.

Some people out there will love this book, but it just wasn't my thing. It seemed to me to be written from a female perspective (ie: love, divorce and massages) possibly with female readers in mind. At 200 pages, it was a tough read for me.
Posted by Sonar4landing Dock Reviews at 1:19 AM