Scarecrow & The Madness by Robert Essig and Craig Saunders Review 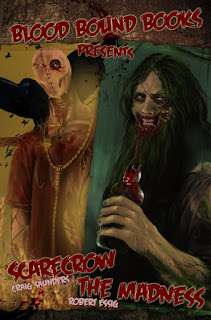 
The Scarecrow and The Madness are two stories published together in 2011 by Bloodbound Books. It is an interesting pairing as they really have nothing in common besides being in the horror genre and being penned by twisted authors.
The Scarecrow is by Craig Saunders and is set in England. It involves Bernie and Margaret, two people who have obviously been married forever, taking a little trip into town. Marge to do some shopping and Bernie to have a pint at the pub. This would not turn out to be your average trip to town as there was a roaming band of gypsies in town. Bernie, after imbibing more than the allowed “just one”, is rudely interrupted by the gypsies in the pub. This leads to the police busting in and breaking it up. The gypsies pledge revenge against Bernie. So far, somewhat predictable, but I won’t go into it any further and ruin the story for you, but it is twisted and will have  you looking at farmers’ wives’ in a whole new light.
The Madness, by Robert Essig, is by contrast set in Colorado. It involves a nice banker, Tony, getting caught in a blizzard on his way home from the bank and being forced to seek shelter at the closest house to the road he was on.  That house belongs to Dan and Sue along with their son Phillip. Sounds nice and normal right? Well, Tony has a dead brother (Randy) who manifests in Tony’s mind and has conversations with Tony.  Dan has a family “curse” they call a “tickle” that causes the men in the family to kill eventually. Dan’s father killed both his mother and brother, but left him alive for some strange reason. Mix that all together and you end up with a twisted little tale that contains violence, extreme torture and coming of age.
Neither of these stories is for the weak at heart. While I liked both stories, they took my mind into places I would rather not have been. I actually had to stop reading the second story a couple of times as I had to recover from what was there. Both stories have unique twists to them that make them worth the read.
I would recommend them to anyone over the age of 18 that can handle intense violence and psychological horror.
Posted by Sonar4landing Dock Reviews at 9:59 AM