Zombie Ohio A Tale of the Undead by Scott Kenemore Review 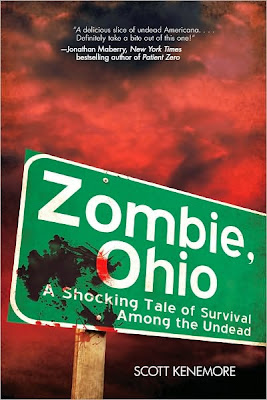 Peter Mellor wakes up disorientated with a car crashed nearby. He is unsure what has happened to that car. Was he in a car accident? He also doesn't remember who he is. Getting up slowly, he grabs his hat and places it on his head, which is now half-gone.

He runs across some people who recognize him and give Peter some semblance of his memory back. When he comes in contact with an old friend named Sam, he starts to realize something is not right. Zombies are all over the place and maybe he assumes he had the car crash because he was running from them. After looking at himself in the mirror with his head half-off, he started wondering if perhaps he is a zombie.

Later, he watches a zombie move and eat. Something feels right about that. As it turns out he can still walk and move okay, but Peter learns in fact he is a zombie.

Kenemore takes readers on a different take of an undead story, from the perspective of a zombie. However, not just any zombie, but one that talks and acts like a regular human, he just has a preference for a little different type of food, brains.

This story shows that even a zombie has to deal with moral issues and try to discover who they really are. It is a brilliant collection of characters with a background story that will surely make you reconsider a zombie outbreak.

Posted by Sonar4landing Dock Reviews at 8:26 AM